Nintendo has always been considered an innovative gaming company, but unfortunately consumers don’t see half of what they come up with. For example, did you know that back in the 1980’s Nintendo had a prototype for a Nintendo knitting machine? Yes, we’re talking about an actual knitting machine that hooked up to your NES and knit sweaters, complete with fun 80’s designs! Sadly, it was never taken seriously, so it never hit the shelves for consumers. In fact, until recently, there was never any confirmation that such a device ever existed. Then, “gamemaster” Howard Phillips posted a photo of the 1980’s brochure on Facebook and confirmed the existence of such a prototype. 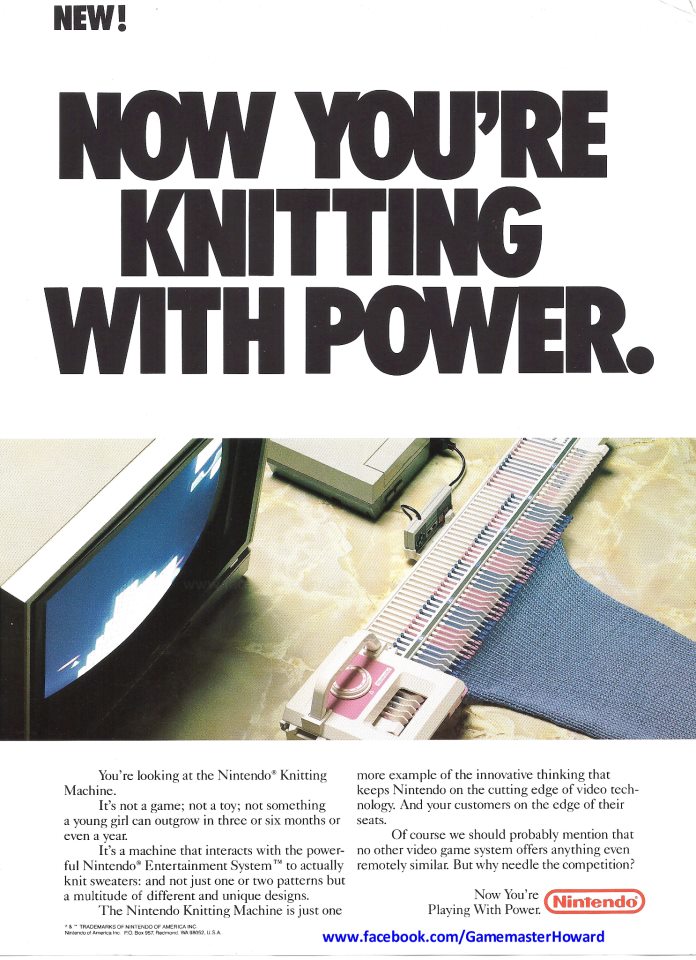 Marketing aside, perhaps Nintendo was just too far ahead of their time with the release of this knitting machine. While it was considered a weird anomaly to those that heard of it back in the 80’s, those that saw the post on Howard Phillips Facebook page were excited by the idea of such a contraption. Many people said that if this came out on the shelves, they would buy it in a heartbeat! With today’s DIY attitude and hipster fashions, perhaps a Nintendo knitting machine would receive an entirely different response this time. Discoveries like this one make me wonder, what other cool peripherals might Nintendo have hidden in their rejection box? Perhaps we’ll soon find out about a Nintendo sewing machine?

What do you think? If Nintendo came out with a device that hooked up to your gaming system and knit a variety of sweater designs, would you buy it? Personally, if this Nintendo knitting machine actually worked, I would be excited to try one out. In fact, they don’t even have to release it for a newer gaming system. My NES is ready and waiting!